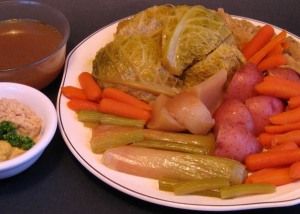 Although my tastes generally run to foods that are hot and spicy, caramelized, pan-seared, or grilled, sometimes I’m in the mood for simpler fare, especially on cold wintry days. This kind of weather often turns my thoughts to the cozy goodness of slow-cooker recipes. The other day I wanted something loaded with veggies but more substantial than soup. I cracked open a copy of Fresh from the Vegetarian Slow Cooker, and my eyes landed on the perfect solution: Pot au Feu!

Similar to the Italian bolito misto or the Boston boiled dinner my mother occasionally made when I was growing up, the pot au feu is simple no-frills comfort food. Literally pot on the fire, it refers to a French dish of meat and vegetables slowly cooked in water or broth. Usually, the rich broth is served with croutons as a first course.

The vegetables included may vary according to the region, but usually contain potatoes, carrots, and leeks. I added slices of seitan during the last thirty minutes of cooking time, just long enough to heat the seitan and let the rich flavors of the broth permeate it. Served with a crusty baguette and a glass of wine, it was just like dining in the French countryside — only different.

Slow Cooker Pot au Feu
This recipe is adapted from Fresh from the Vegetarian Slow Cooker. If you don’t have a large slow cooker, cut down on the quantities slightly so that everything fits. Instead of making a horseradish sauce as an accompaniment like I do in the book, I put out small bowls of prepared horseradish and coarse brown mustard. Of course, it’s best served with a baguette — try it sliced and toasted, then brushed with a little olive oil and rubbed with garlic.

1. Cut the leeks into 3-inch long pieces and place them in a 5 1/2 to 6-quart slow cooker. Add the potatoes, parsnips, turnips, carrots, celery, and cabbage. Pour the broth over all, add the bouquet garni and a splash of wine. Season with salt and pepper to taste. The amount of salt needed depends on the saltiness of your broth. Cover and cook on Low for 6 to 7 hours, or until vegetables are tender. (See note.)
2. During the last 30 minutes of cooking, add the seitan slices. Taste the broth and adjust the seasonings, if needed.
3. To serve, remove vegetables and seitan from the broth. Discard the bouquet garni. Serve the broth as a first course or alongside the entrée. Arrange the vegetables and seitan on a large platter. Serve with condiments and toasted bread.
Serves 4

Note: Some slow cookers (crockpots) cook faster than others. The cooking time is approximate. If you want your meal cooked faster, cook it on High and it should be ready in about 4 hours. In either case, if possible, after about 3 hours, pierce your vegetables with a fork to test for doneness, and baste with some of the broth.

When I asked my friend Patty, a native of Buenos Aires, to tell me about her favorite foods growing up, I expected to hear about all kinds of exotic South American fare. Instead, she told me her favorite meal was pasta with marinara sauce. She explained that Italian food is popular there because of the Italian immigrants who settled in Argentina in the late 1800s. Argentine cuisine varies further due to the influences of other European settlers, such as the Spanish and British, along with the native Indians.

Patty also told me about a popular spicy lemon-marinated beef dish, for which I mentally substituted “seitan” for the beef and quickly set about to making my adaptation a reality. The tangy lemon flavor permeates the seitan which is then dredged in seasoned breadcrumbs and pan-fried or broiled until crisp and brown. It turned out so well that I included the recipe in Vegan Fire and Spice.

When I made it recently, I served it with sides of sautéed red chard and potatoes sautéed with red onion, red pepper flakes, oregano, and lemon juice, which complemented the seitan nicely.

In the book, the seitan for this recipe is broiled (with sautéing or grilling optional). Here’s the recipe the way I made it the other night, pan-fried:

Argentinean-Inspired Seitan Cutlets
This recipe is adapted from Vegan Fire and Spice.

1. For the marinade, combine the lemon juice, 1/2 teaspoon hot red pepper flakes, 1/4 teaspoon salt, and 2 tablespoons of olive oil in a bowl. Arrange the seitan cutlets in a baking dish without overlapping and pour the marinade over them. Marinate for 1/2 hour at room temperature, or several hours in the refrigerator, turning once or twice to spread the seasoning mixture evenly.
2. Place the breadcrumbs in a shallow bowl. Add the remaining 1/4 teaspoon red pepper flakes, 1/4 teaspoon salt, and the oregano. Remove the seitan from the marinade and dredge in the bread crumbs, pressing the crumbs into the cutlets with your hands.
3. Heat the remaining oil in a large skillet over medium heat. Add the cutlets, in batches if necessary, and cook until crisp and golden brown on both sides, turning once, 3 to 4 minutes per side. Serve with lemon wedges.

When the Cupboard is Bare

I love the challenge of making a decent meal when there’s almost nothing in the cupboard and fridge. I was put to the test last night. I’ve been cooking like crazy lately, testing recipes for my fall 2009 book, 1,000 Vegan Recipes, and buying only the groceries I needed for each batch of testing. The previous day, I had tested the final recipe I had shopped for and just didn’t feel like going grocery shopping for another round. After spending the day at my computer yesterday, I was oblivious to the fact that the refrigerator and pantry were nearly empty. Then suddenly it was time for dinner. Fortunately, some lonely brown rice and canned beans were among the few remaining items in the pantry — a good start. But what about vegetables?

Even when I have a full larder, I often look to vegetables to inspire a meal, but the only vegetable I had in the house was a bag of frozen baby Brussels sprouts. I usually like to roast Brussels sprouts in a hot oven and spritz them with lemon juice. But for this meal, I decided to cook the tiny orbs the way I would broccoli rabe or escarole. After a quick blanching, I sliced them and sautéed them in garlic and olive oil until tender, sprinkled with basil, oregano, salt and pepper, and hot red pepper flakes. I then added capers, black olives, and cannellini beans and sautéed everything until hot. Served on a bed of brown rice, it turned out to be a satisfying and flavorful meal. Of course, now the cupboard REALLY is bare!

You Heard the Call!

The response to my call for recipe testers has been overwhelming and I thank you all for your enthusiasm and desire to help. With so many talented cooks willing and able to sign on, I definitely now have enough testers lined up for the next few books! Thanks again for your interest and for all the kind words about my work.

I’m happy to report that I’m doing the final testing for my next book, 1,000 Vegan Recipes and also working on the one that follows. With all that testing to do, I’m hoping to recruit 4 or 5 new recipe testers.

All I can promise as a thank you is your name in the acknowledgments, so if you love to cook (and eat!) vegan food and would like to help, you would need to be detail-oriented and able to articulate recipe critiques and suggestions.

If you can commit to testing 3 to 4 recipes a week between now and February 1st, please send me an e-mail expressing your interest. Experience in recipe testing is a definite plus, but not required. Recipe testing begins next week, so let me hear from you soon!

I’m happy to report that I’m doing the final testing for my next book, 1,000 Vegan Recipes and also working on the one that follows. With all that testing to do, I’m hoping to recruit 4 or 5 new recipe testers.

I’m looking for detail-oriented people who love to cook (and eat!) vegan food, and and able to articulate their critiques and suggestions about the recipes.

If this sounds like you, and you can commit to testing 3 to 4 recipes a week between now and February 1st, please send me an e-mail expressing your interest. Experience in recipe testing is a definite plus, but not required. All I can promise as a thank you is that your name will be immortalized in the acknowledgments. (For e-mail, click on “view my complete profile,” then click on “e-mail” under “Contact.”)

I hope to begin the next round of recipe testing next week, so let me hear from you soon!

It’s not every day that a new book, much less two, crosses my path that actually makes me unbury myself from my own work and take notice. In the growing list of great books designed to enrich the lives of vegans (and those who want to be!) here are two gems: 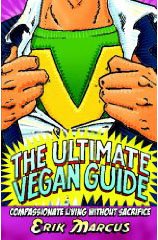 In his new book, The Ultimate Vegan Guide, Erik Marcus distills and demystifies the many facets of “going vegan” in one easy-to-read and entertaining volume. In this thorough and fun guide, Erik offers advice and tips gleaned from his 20-years of personal experience as a vegan. The book covers virtually every aspect of a vegan lifestyle from nutrition and cooking, to dining out and grocery shopping, as well as a great section on activism and outreach. 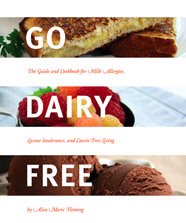